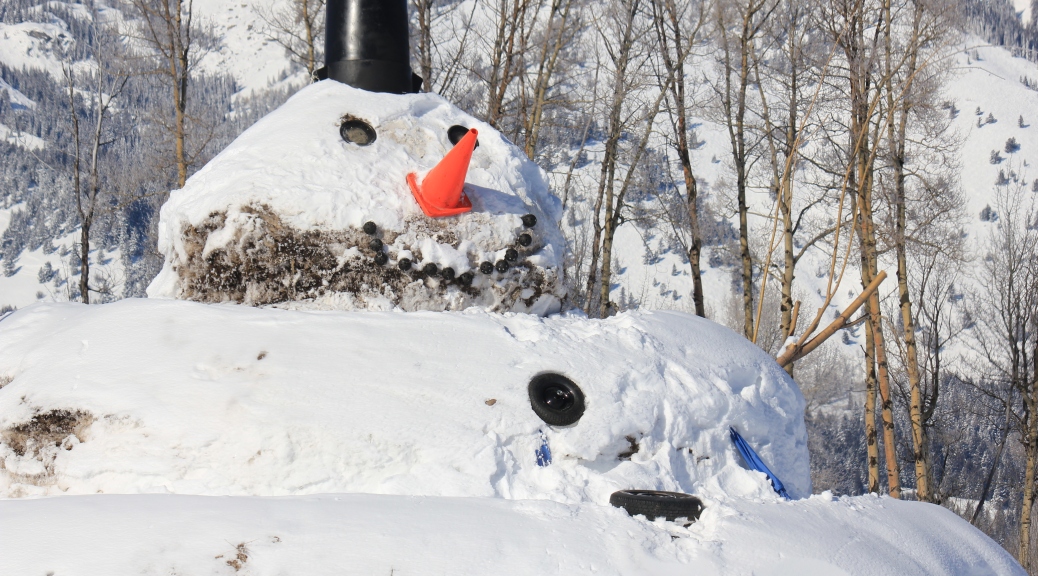 Jackson Hole, where both ski bums and grown ups settle, is the 48-mile long valley that includes the town of Jackson, Jackson Hole Mountain Resort, Teton Village, Wilson, Moran, Kelly, and a town called, simply, Moose.   I’ve never been a place more Christmas-y than the town of Jackson.  Bundled in plaid wool and shearling, and accented with antlers, the town of Jackson glows quietly from Jackson Hole’s darkened valley.  You can curl up in a log cabin at The Rustic Inn, feast in a log cabin at Café Genevieve or stir your drinks with plastic rifles at The Gun Barrel.  Best of all, if Brad and I retired in Jackson, our sons, Gage and Cole, would visit often just to go to The Mangy Moose.

Named “One of the 10 hottest Aprés Ski bars in the world,” by Forbes Traveler, the Mangy Moose’s nuclear wings are the reason the kids stop skiing at the end of the day.  The ratty-looking, taxidermied Moose that watches over the boisterous restaurant from the ceiling gives the restaurant its name and fits in with ski-weary revelers below.  Despite the Mangy Moose’s popularity, we have always been able to find coat hooks for our helmets and a table to belly up to.

We can thank Groupon for introducing us to Jackson Hole in 2012 when we grabbed a $200/night Groupon for The Rustic Inn.  American Airlines flew us directly to Jackson from Dallas.  We exited the airport and drove into complete darkness.  I haven’t traveled in darkness this opaque since visiting my grandparent’s farm in rural Minnesota.  In Jackson Hole, the darkness is not only noticeable, it’s deliberate, because Jackson Hole’s residents combat a problem I’ve never heard of in nearly-neon Dallas:  light pollution. As part of the International Dark Sky Association’s project, an organization called Wyoming Stargazing is working hard to help maintain as much darkness as possible in Jackson Hole.

Twenty minutes down the road from the airport, we arrived at The Rustic Inn .  Given the price, and the fact it offered a Groupon, we didn’t expect much.  But we pulled into a group of snow-crowned log cabins flickering with string lights and charm.  The Rustic Inn had arranged a ski valet, who arrived just after we turned on our fireplace. Our equipment was almost perfect.  Gage’s boots weren’t quite large enough.  “No problem,” the valet said.  “I’ll meet you at the hill with the next size up tomorrow.”  He did!  We were on time to meet him and he was waiting.  Nice.

We’ve also sacked out at the divine Spring Creek Ranch, perched 1,000 feet above Jackson.  Tranquil and romantic, its Granary Restaurant has one of the most astounding, panoramic views in the area.   The drive up Spring Gulch Road to the ranch is an adventure in itself.   Lodging options range from inn rooms to mountain villas.

For a condo right in Teton Village at base of the ski hill, check out the dreamy timber and stone Hotel Terra. It’s staff took really good care of me when I tore an ACL.  Hotel Terra’s service is attentive, even if you don’t blow out a knee.

For the view, go to the Granary.  For kitsch — a lot of kitsch — try The Gun Barrel.  Service is handled by harried newcomers who have never waited a table before, but they do serve elk, buffalo and venison in a log-walled, western setting worthy of Walt Disney.

To tuck into a cushy, relaxed meal, head to Cafe Genevieve and start with the Elk Carpaccio or the Pig Candy (strange but addictive sugared bacon).  My husband, who will try anything, loved the Crispy Skin Wild Striped Bass.  Whatever you order, be sure to get a side of Mac and Cheese; it’s perfect for a chilly night.

When we want to find a great, inexpensive restaurant, we ask a local who can’t be making much money; e.g., a lift operator or ski-boot fitter.  This is how we unearthed Pinky G’s.  Hiding in an interior courtyard, the amiable, unpretentious Pinky G’s makes decisions simple:   Pinky’s offers one kind of white wine, one kind of red and pizza named with a sense of humor:  The Fatty, The Funky Chicken, The Abe Froman.  Our favorite is the Abe Froman with sausage, buffalo mozzarella, basil.  (You might remember Abe Froman from Ferris Bueller’s Day Off. )  Pink G’s menu lists salads, though that is probably ceremonial — I’ve never seen a salad eater here.

For breakfast, take the Big Red aerial tram up to Corbet’s Cabin for waffles.  Corbet’s Cabin sits atop Rendezvous Peak at 10,450 feet, a gusty tip of the ski hill that may give you vertigo.  You can see crazy skiers descending this Corbet’s Couloir from Big Red.  (You can ride Big Red back down the mountain if the black runs are too much for you.)

If the thought of Corbet’s Couloir makes you want to reach for a Xanax, relax.  Much (40%) of Jackson Hole Mountain Resorts hills are intermediate and are spread all over the resort (tip: wear walkie talkies instead relying on cell communication).  The lifts are quick.  Lines are long enough here to prove you’ve picked a popular spot, but not annoying long.   When we arrived, a band was playing next to Bridger Lift.   Trails are well-marked and full of ski patrols, which comes in handy when you are a dork.

On our second day of skiing, we were coming down Amphitheater when the boys decided they wanted some hot chocolate.  They glided over to the on-hill Casper Restaurant via the South Traverse at their teenage-boy speed, while Brad coached me down Amphitheater with lessons on “how to get my hips into it.”   I caught on intermittently.  Gage, my older son, called to warn us that Gros Ventre would be icy on the way to Casper Restaurant, and he was right.  Crossing Gros Ventre to the South Pass traverse was frozen and I sideslipped down the hill more than across.  Still, I managed to narrowly catch the Traverse on the other side.

Careening onto the traverse, I turned, but my skis did not.  I found one leg on the traverse, one off.  That off-leg dropped, putting me in the splits and I tumbled, hearing cracks, bangs and smacks.  One of those sounds was my ACL, a ligament in the knee.  Brad skied down to me and got my remaining ski off.

By the time the ski patrol arrived, I had progressed from panicked to embarrassed.  The ski patrol, however, wanted to take me to the clinic, just in case, so I lay cocooned in the basket and took a ride, feeling silly.

When Brad arrived at the clinic, he first asked if I was okay, then announced, “I think you should stop skiing.  You just don’t know how to fall.”

I think you should stop skiing.  You just don’t know how to fall.

I left on crutches with built-in crampons.

I probably should stop skiing because, not only do I not know how to fall, I will never naturally get my hips into it.  But I will still plan yearly ski trips because Brad loves it and has an ease on the hill that Gage and Cole have inherited.  He makes skiing look effortless and fun, and the boys hurtle along with him with varying degrees of control, but full-throttle glee.

We used to play a game when the kids were little.  We would grab a hot chocolate and watch for Brad to ski down to us.  Cole might point to a skier in a non-fashionable jacket who turned out to be someone else in a non-fashionable jacket.  Then Gage would point to someone else.  Maybe . . . nope.  Finally:  “That’s him!”  Brad is so recognizable on the slope, not because he won’t buy a new jacket, but because he’s got a serpentine pattern whose grace Will Ferrell would envy.

Skiing gets everyone outside and radiant with exhaustion.  It’s not just the kids who leave the electronics behind, it’s the father, too, who works too many hours on a computer.  Brad’s no workaholic because he hates working.  But he does take good care of his clients.  Skiing is a great release for him.  Important as anything else, the boys will be confident skiers.  When we moved to Texas, I thought I could avoid the skiing that caused me so much embarrassment in Minnesota, but that turned out not to be true.  Knowing how to ski well, the boys won’t ever have to hope to get the flu to stay off the slopes.

Snowmobile, cross-country, or dog sled.  Jackson is full-fledged town, with shopping, spas and, most importantly The Valley Bookstore.  The Valley Bookstore is no Barnes and Noble.  This independent book store has been on Cache for 45 years, cherry-picking a fantastic selection and packing it into a small space. 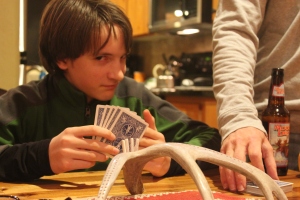 You can buy just about anything made with antlers in Jackson, including furniture, lamps, a cribbage board, or just plain antlers, priced by size.  After all those rustic antlers, head to the sophistication of the Diehl Gallery.

We stumbled upon the Diehl Gallery while antler shopping. The understated sensibility of this very urbane gallery in western town surprised us.  The aesthetic here is as current as any large city:  beefy paintings, luscious drawings, fresh takes on sculpture.

After skiing, antlers, and art, it is time to see how the other half — nature — lives.  Please, skiing or not, take a sleigh ride through The National Elk Refuge if you visit from December to Mid-April. 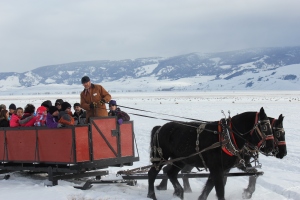 The elk arrive voluntarily to the refuge in the winter and stay for the alfalfa pellets.  Despite the freedom to come and go, about 5000 animals hang out through the winter, so the refuge makes excellent viewing.   When you visit in winter, the elk are still using their antlers, which they shed in March or April.  Antlers are auctioned by the Jackson District Boy Scouts at Elk Fest on Memorial Weekend.

There are other wildlife viewing options to consider, like an outing with Jackson Hole Wildlife Safaris. In the four hours we spent with our guide, we saw buffalo, elk, moose, bighorn sheep, coyotes, bald eagles and a fox.  The trip was worth every nickle. 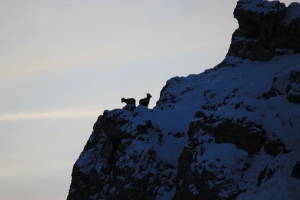 On our first trip to Jackson Hole, we rented a car at the airport.  The weekly rate was an insane $1,200.   As soon as you make plane reservations, contact Leisure Sports Car Rental, Jackson to rent.  They are half the price, can pick you up at the airport and drop you off.

I adore Jackson Hole.  It’s friendly, unpretentious and breathtaking.  The ski patrol who schlepped me down Gros Ventre sent me a postcard for Christmas.  We’re going back.