Crater Lake in Oregon, where our young sons, in shorts and tees, pelted us with snowballs one sunny August day.

The lake itself taught us that we could see nearly 100 feet into the water if that water is clear enough. Unblemished with the sediment that river-fed lakes carry, only rain and snow feed this 1,934-foot deep puddle in the caldera* of a volcano.

We hiked from the rustic, sturdy parkitechture of Crater Lake Lodge, singing a song our youngest, Cole, made up. We climbed enormous stone steps and steep trails high enough up a mountain to find sticky and heavy snowball-snow that hadn’t melted.

After a few battles, we hiked back towards the lodge, stopping at a scenic overlook high above the lake. An older couple joined us, standing at the same rail.

Unfortunately, as I backed up to take a photo, the older woman’s knees buckled, and she slid under the rail. She was lucky that both her husband and my own grabbed an arm, or she might have fallen 1,000 feet into the caldera.

Was it steep? Yes, look at how trees planted roots horizontally but grew vertically:

Strangely, she insisted on continuing up the mountain.

We said good-bye, but even our 4- and 6-year old wondered if that older man would be able to catch his unsteady wife on his own. We decided to report the incident at the lodge, ordered some hot chocolate, and settled into rocking chairs on the porch.

When a bulked-up rescue ranger asked to speak to Brad, my husband, we expected bad news, but Brad came back laughing. The guy cussed him out for reporting an incident, saying we had caused an unnecessary rescue operation, and who the hell did we think we were.

As the burly guy ranted, our youngest threw up on his shoes. 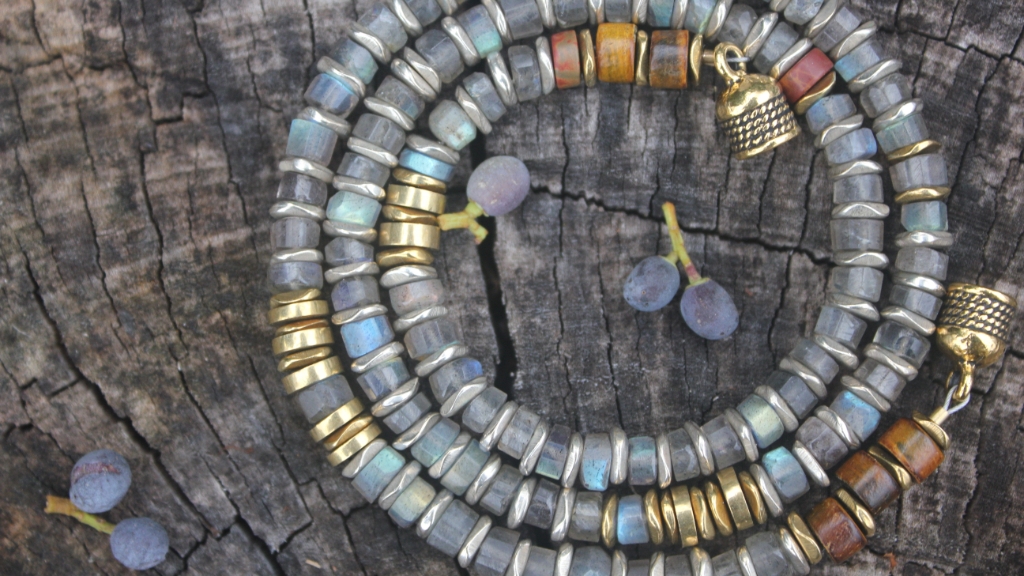 It is a slow year for travel. But not to be outdone, I created a collection of jewelry based on my favorite beautiful places: National Park lakes, pools, waterfalls, and trails. I started with particular places I missed seeing the most. Those spots inspired the leather and gemstone bracelets and necklaces in this collection for men and women. I invite you to check out:

I hope we will all be traveling again soon! 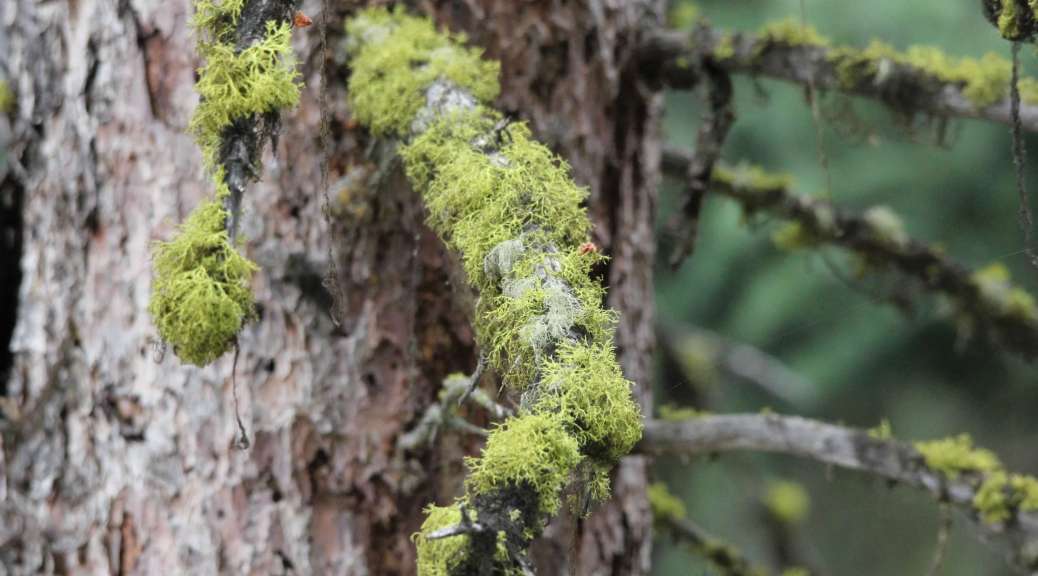 Most Ranger talks are informative. This one was, but it was, as my youngest would say, not information-dense. So we ditched it and hoped we wouldn’t run across the group on the way out.

We escaped into a forest so green, lush and dark that we needed a flashlight.

The darkness broke up at Storm Point, overlooking the serene Yellowstone Lake. We spent some time taking pics of each other’s crazy wind-blown hair, then headed back into the verdant woods.

I feel a little guilt ditching the Ranger Talk. Park Rangers are among my favorite people. But sometimes you just want to take in the view. That moss…wow. 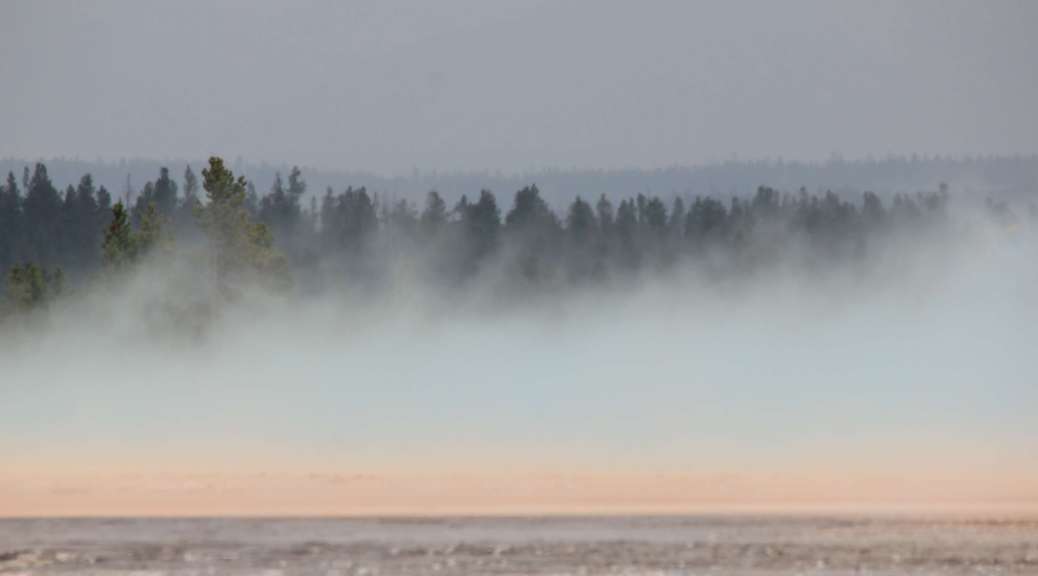 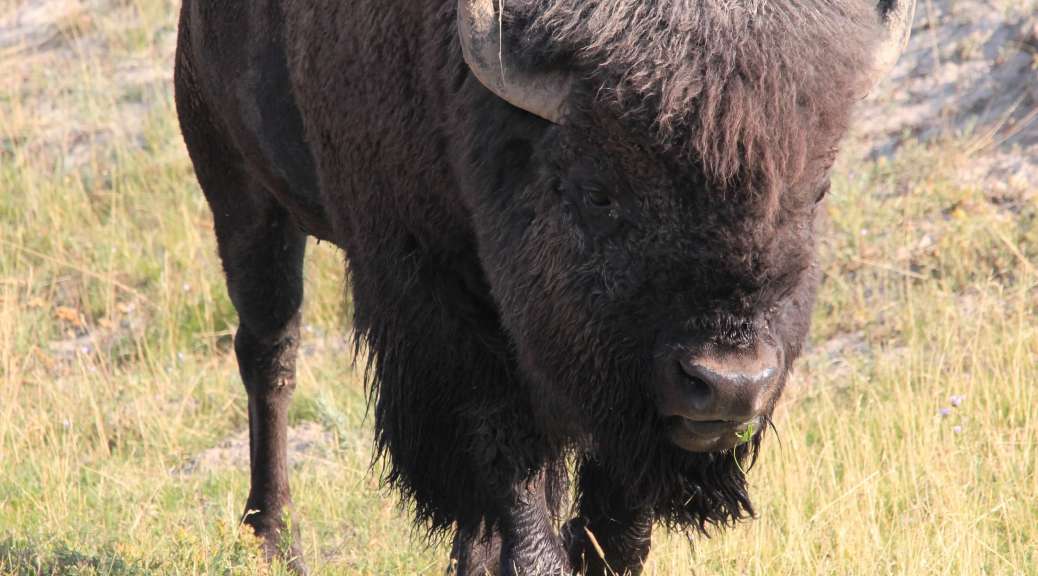 The next jam was the most common wildlife traffic snarl in Yellowstone: bison.  Bison are huge and ubiquitous.  Husband Brad calls them rattalos because they are everywhere!  A calf approached our car very directly.  While I was composing a shot, I found out that bison are not as doped up as they look.  A huge, male bull shrieked a bellow at the calf and shook its black tongue at me.  Thought I was going to need bear spray.

Eleven hours later, we still had seen no bears other than that smudge in the field.  No more elk, no moose, big horn sheep, mule deer or antelope.  Other than bison, we saw chipmunks, squirrels, Canadian Geese and a vole, which is like a mole, only Northwestern.   After eleven hours, we were beat.  Honestly, as we headed back to Old Faithful Inn, it would have taken a big horn sheep riding a bear to get us to stop.

I Hate to Leave this Beautiful Place – Howard Norman

Old Faithful Inn is authentic National Parks architecture: a massive stone and log lodge like El Tovar (Grand Canyon), Crater Lake Lodge and Many Glacier Lodge (Glacier National Park). Built with lodge-pole pines as long as corridors, these structures center around immense, multi-story lobbies whose rock fireplaces draw weary visitors in the evening. Despite the parks size, Yellowstone has only one grand lodge, but it is easily the nations most impressive.

Beams with arms like Popeye support the inns six-story lobby. Built in 1903-1904 without Starbucks or power equipment, Robert Reimers design included electric lights and steam heat. Light cascades into the interior from three stories of dormers and casement windows so high they need ladders. One can see the catwalks of an even higher balcony The Crows Nest but cant go up. Orchestras once played from the Crows Nest until an 1959 earthquake made that level unstable.

We played a lot of cards on these balconies, one night listening to a cellist. She ended the evening with Beethoven’s “Moonlight Sonat” on a grand piano that looked small in this massive structure.

Lounging in the lobby, I wonder what flipped-out worker volunteered to pave the ceiling 92 feet above me with logs. What an insane job. The Old Faithful Inn, what an insanely beautiful, mellow place to vacation. 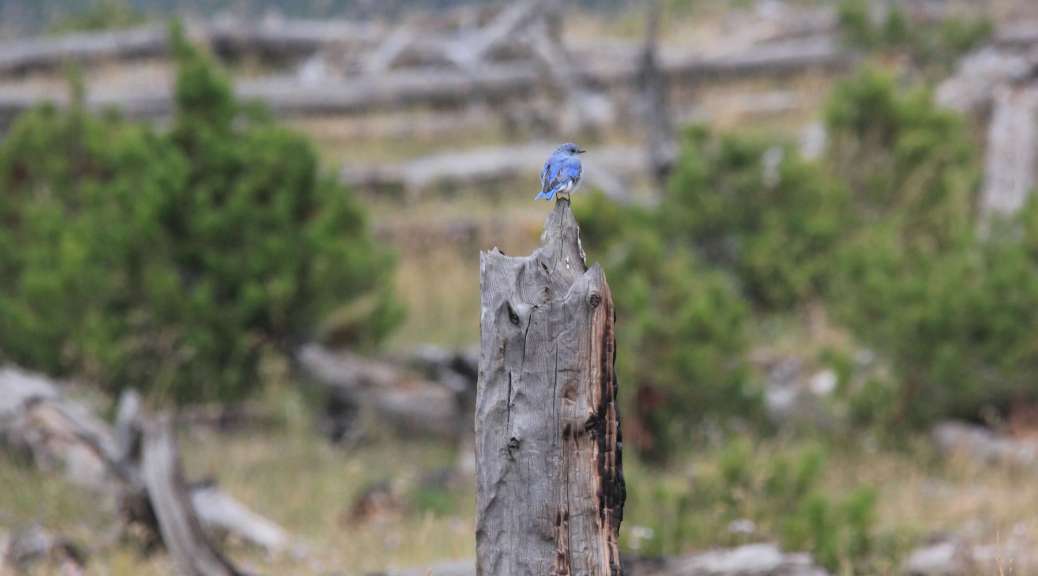 Until you see a real one.

And the blue flash of it flying away.

The best place to eat in Munich just might be in the basement of the City Hall. No overcooked cafeteria, this enormous, upscale eatery has a wine list (!), entrances off four streets and is made small and intimate by the broken-up space.

Our waiter was also an expert napkin folder, a magician and expert beer-pusher. Gage gave in. Cole, however, but refused to drink it (he had taken an Oath!)

Finally, the waiter got random tooth picks to form a star without touching them, so we nabbed a few coasters to try this at home.